About The Newfoundland Dog

The Newfoundland dog is a breed of dog that was originally bred in the Dominion of Newfoundland, a province of Canada.  They are known as a canine seaman because they are usually bred as working dogs for the fishermen in the province.  These dogs have a large built and deep bark and would appear usually appear as black, brown, gray, or both black and white.  They would naturally accompany their owner, protect children, pull leaves and firewood, and save people from drowning.  They are extremely good when it comes to lifesaving because of their muscular build, water-resistant double coat, webbed feet and natural swimming abilities.  Its huge musculature provides the dog the ability to stand up to undertake forceful ocean waves and strong tides.  It also has a tremendous lung capacity that is good for swimming really long distances.  Their water-resistant double coat is also capable of protecting them from the cold icy temperature of the water.  It repels water because of its oily nature, thus, this dog can swim in water for hours but can remain dry and warm.  The swimming strokes of a Newfoundland dog are very different from the other dogs, which only use the typical dog paddle.  This dog can move its limbs in a down-and-out motion similar to a modified breaststroke.  Their ears have the capacity of keeping the water out and their loose flews enable them to breathe while swimming (even though they are carrying something with them).

Also known as the gentle giant, the Newfoundland dog are recognized for their strength, calm disposition, docile nature and loyalty.  They are also called the nanny dog because they make a fine watchdog and are really good with children.  This characteristic was demonstrated in Peter Pan through the dog named Nana, the nurse dog of Wendy, John and Michael.  They are also good with other animals.  Unfortunately, the Newfoundland dog are prone to him dysplasia, elbow dysplasia, cystinuria, and subvalvular aortic stenosis.  If you are thinking of raising a Newfoundland dog, you better make sure that you are ready for all the responsibilities that will come with it.  It would be really advisable if you would visit a kennel or a breeder first before buying one.  You should be prepared to give this dog a thorough combing every week because they are heavy seasonal shedders.  Moreover, you should not be grossed out by how much this breed drools they are capable of chucking their slobber up to 20 feet.  It is important to enroll them in a basic obedience class once they are old enough to receive their rabies shot.  This will help your dog to take control of their strength to avoid causing injury to you or to other people.  In addition, you should be willing to conduct brisk exercise with your dog or else your dog will become unhealthy and fat.  It would be also recommendable to allow them to stay inside your house because they would prefer being with their owners. 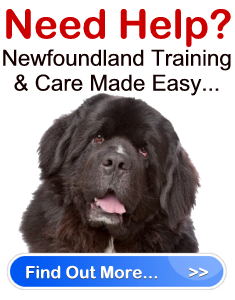